When Dana was 14, she discovered a chatting program called ICQ.  Once, in a chatroom, a boy asked her if she knew what an orgasm was.  “Yeah I do,” she said, “but you spelled it wrong. It’s ‘organism.’” The boy turned out to be from Wales.  Dana was from the Bay Area.  Over time, the two developed a relationship together.  They sent emails to each other every day.  They never exchanged pictures or talked about sex, but in a way, they were in love.

Dana’s story isn’t unique, but like artist Ann Hirsch’s ebook “Twelve,” it belongs to probably a million other untold stories about girls and boys who have used chatrooms and instant messaging as a gateway to their adulthood.  Hirsch, known for her YouTube performances as a “camwhore,” wrote “Twelve” after finding a poem that she had written when she was 13.  Unable to find the actual dialogues, Hirsch accessed memories of chat lingo and strange relationships that would be looked down on in traditional media. Indeed, when Hirsch tried to publish “Twelve” recreated as an app on iTunes, it was censored from the iTunes Store by Apple after receiving attention from the press.

When I talked to Hirsch on the phone, she told me that only a few hundred people had access to the “Twelve” before it was taken off iTunes, and a subsequent iOS update would have removed it from their devices anyway.  As part of Andrew Durbin’s “New Agendas,” her reading of half of the story with several other people this past Saturday at Macie Gransion Gallery made for a unique opportunity to see what exactly Apple found so objectionable.

“Twelve” opens with young, 12-year old Anni learning the semi-outdated lexicon of early AOL chatrooms.  Concepts like ToSing and cybering are thrown around casually by a slightly older set of teenagers.  Interpreting the young, naïve disposition of her character, Hirsch affected a high pitched voice that seemed to always end sentences with a question mark.  When some of the users badmouth Jobe, a 27-year old with muscular dystrophy, who leverages himself as an intellectual against the inexperienced teenagers, Anni defends him.  For the first half of the reading, Jobe physically hovers behind the other readers as a clue to show that for most of the chatroom discussion, he is “afk,” or away from the keyboard. 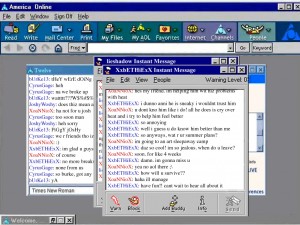 Screenshot from “Twelve” the app

Despite using antiquated terms and a number of lolspeak acronyms, even though “Twelve” was written as an ebook and recreated as an app, it translates quite fluidly to a low-key comedic theater.  In general, this owes to the audience’s fluency in various negotiations of the internet medium.  When Anni has awkward cyber sex with one of the boys, for instance, the translation of the written word to the actors speaking the actions out loud comes off as the most entertaining part of the reading.  But we can easily relate to and understand what is going on.  It is undoubtedly the cyber scene between Jobe and Anni that got the app banned from the iTunes store.

At the same time, it makes for the most meaningful aspect of “Twelve.”  “My aim in talking about these issues,” Hirsch told me, “is not to fetishize them.  When there is pedophilia in literature and often in art, the young woman or young boy is at risk of being fetishized and objectified” for the benefit of the older figure.  “My goal is to tell a real story: what it actually means to be the child involved in that, and to describe the unique way that this occurs online.”

Far from letting Jobe take advantage of her, Anni is able to use the distance afforded through chatting online to learn from Jobe while informing herself about her sexuality and her identity.  As for Jobe, we find that he uses AOL to cope with his disability, and the fact that he still lives with his mother in Kentucky.  It is perhaps not so much the pedophiliac cybering that Apple ultimately has the most trouble with, but the reality of an unmanageable group of youth who use Apple’s products for unintended, and sometimes illegal, purposes. This is especially the case as Hirsch had listed the app as suitable for anyone over the age of 12.

While corporations like Apple and Facebook attempt to define their platforms as corporate and institutionalized, youth are always finding ways to upend their efforts.  As Dana’s and Hirsch’s stories show, chatrooms and other netherworlds of the internet have acted as a coming of age space, a place where people can find out about themselves as they find out about others in private.

In this case, the censorship of “Twelve” has more dire consequences than perhaps Apple intended.  “As soon as I started talking about the project,” Hirsch told me, “all these people were like, ‘Oh my god, I did that and I have this crazy experience.’” Indeed, anyone to whom I related the plot of “Twelve” responded with their own stories about how chatrooms were the only place where they could be honest to a group of strangers about their homosexuality, weight issues, or psychological difficulties without the fear of face-to-face judgment or condemnation from parents, teens or corporations.  The most powerful function of “Twelve” is that as a work of art it has the potential to inspire so many others to tell their own stories. Although by censoring “Twelve,” Apple has essentially stymied those who are dying to share their coming-of-age stories that involve complicated, racy, and even illegal situations online.

When she started dating people in real life, Dana stopped talking to the boy from Wales.  They found each other years later though, when they were in college and eventually did voice chat.  “He said that he had some major psychological disorder,” she told me, “where he felt like he was extremely unattractive.  For years he was a complete recluse. He said I really helped.”